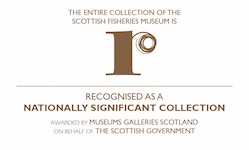 Published research by staff and volunteers

Research undertaken as part of a building survey has revealed lost detail on a carved stone taken from the museum site.

The museum is currently working on a project, funded by Museums Galleries Scotland Recognition Fund, to research one of its buildings. Previous research by Dr Robert Prescott of St Andrews University, School of History had revealed that the building is the former storehouse of the Anstruther Whale Fishery Company, established c.1750 during a period of expansion for the Scottish whaling fleets.

Set into the façade was an 18th century carved ship stone which has now been removed for conservation. When a photogrammetric survey of the stone (a series of 3D scans showing minute changes in the depth of the surface layer - one is shown above) was recently carried out by archaeologists at W A Coastal and Marine, surprising levels of detail were revealed. This research confirms that the carving shows a whaling ship of the mid 1700s.

The stone is now in the studio of Edinburgh sculptor Graciela Ainsworth who is working to stabilise the surface, severely weathered by years of exposure to the harsh winds and weather on the harbour front. It will return to a location inside the museum and a newly carved replica, based closely on the original design, will be set into the wall in its place.

Ships were high-status objects and can be found carved into stones throughout history. Although the carvings are stylised they can sometimes give real insights into the design and use of ships of the period. A current research project in Dundee has revealed details of a very different Ship Stone - see Dundee’s Medieval Carved Stones for details (click on the red image).

The Scottish Fisheries Museum has expanded considerably during its 40 year history. Each property that has been added to the original site overlooking Anstruther harbour has a direct historical link to the fishing industry, whether as former industrial workshops, storehouses or fisher cottages. The research will strengthen the links that we can make between our displays and the buildings that house them.